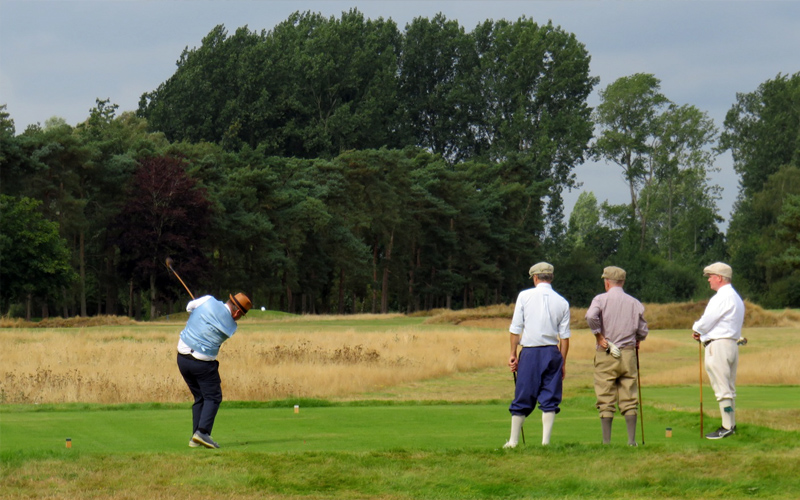 A casual visitor on the day would be forgiven for thinking that they had stepped back in time as players were dressed in Plus 4’s and flat caps, and walked the fairways with half sets of hickory clubs.

The Flempton Links was played as originally intended by J.H.Taylor when he laid the course out in 1906 and it was a delight to play. The only change to how the course is played by with hickory clubs. Accuracy off the tee being the key to positioning your ball away from the multitude of bunkers, scott’s pines and golden rough bounding the shaped fast running fairways.

In the morning 8 Teams of four players competed over 9 holes in a Texas Scramble Format that allowed players to acquaint themselves with the subtleties of the hickory game. The James Braid Team led by Professional Andrew Marshall coming out on Top with an impressive -3 under par total of 67. 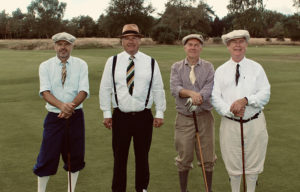 After lunch, the main event was held with both Team and Individual Prizes. In the team format the best 2 scores of 4 counted with Stableford scoring. 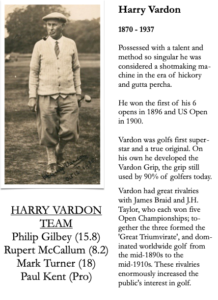 The Vardon Team dovetailed to perfection and was led by Paul Kent (FGC Professional) coming out on top with an impressive 84 Points. 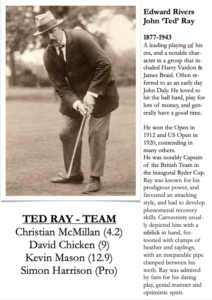 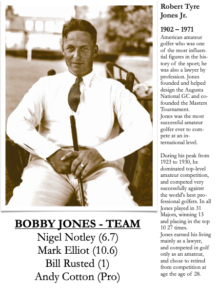 Third place was taken by the Bobby Jones Team from neighbouring Royal Worlington and Captained on the day by BGCS member Nigel Notley with guest Professional Andy Cotton representing their team.

The Handicap Prize was awarded to Bill Rust (Royal Worlington) with a very credible 34 Stableford points. 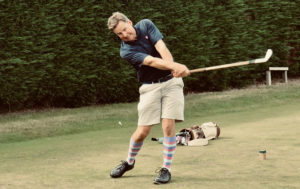 Nearest the pin on the 5th was awarded to David Hughes (Woodbridge GC) for a wonderful Mashie iron to all but 3 feet from the pin, and on the 9th by professional Simon Harrison. Both players winning Hickory Putters kindly donated by Tony Hunt who greatly added to the successful running of the event.

The all important prizes for “Best Dressed Golfers” of the day were awarded to both Mark Turner and Pauline Hawes on their respective Hickory Debuts! 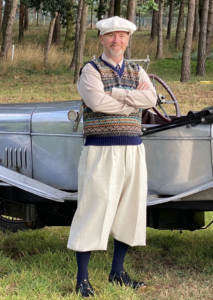 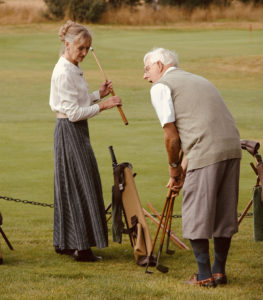 It was wonderful to see Richard Ashton at the club on the day and very kind of him to bring his Vintage Alvis circa 1920 which helped set the scene, and as did the music of the period that drifted out of the open clubhouse doors and windows across to the 1st tee accompanying the players first shots of the day! 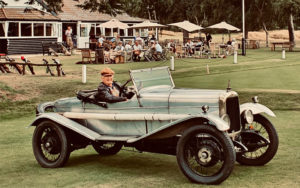 For reference the lady pictured below is Katy Stephenson who was diagnosed with Stage 1 Ovarian Cancer at the beginning of 2021. Katy was fortunate to be diagnosed very early and with a positive prognosis. As a way of giving back following the excellent treatment and care that she has received, Katy organised a number of events leading up to a Dinner & Auction on 2nd October at the Suffolk Barn to raise funds for ‘Target Ovarian Cancer’ with a target of raising at least £5000. This is where all proceeds from the Hickory Pro-Am have been donated. In addition to the generosity of players on the day the Charity have received personal donations following the hickory pro-am day itself from a number of players and supportive FGC members.

We are pleased to be able to report that Katy smashed her fundraising target with over £11,000 raised. 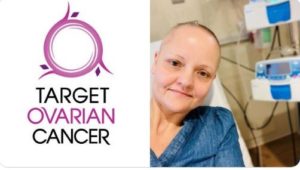 We can also report that following the hickory pro-am a number of participants and businesses have been in contact with AHC1895 and offered to support and help grow the Hickory Pro-Am Charity Event for 2022 and beyond. This is very generous and importantly will benefit the chosen charity by increasing the funds raised, whilst enabling the society to enhance the day for the enjoyment of all players, sponsors and spectators involved. 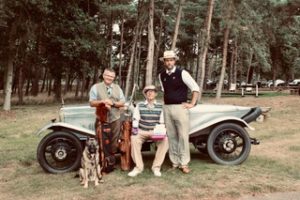 Thanks go to Flempton GC for generously hosting the event, Robert Ashton and Patrick Stephenson for helping set the scene with wonderful vintage and classic cars. Nethergate Wines and Trotter & Dean for supplying the prizes and to all the players, visiting teams and sponsors of the day.

We look forward to welcoming you back to Flempton GC for the 2022 AHC1895 Hickory Pro-Am. 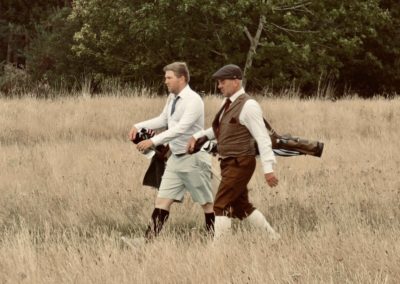 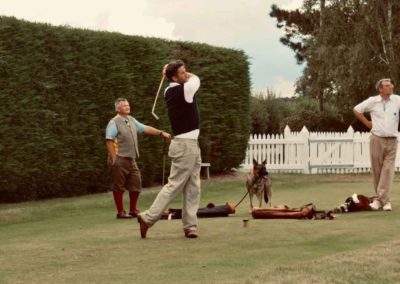 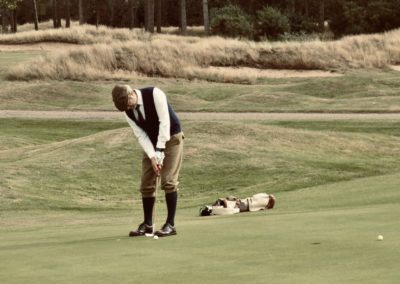 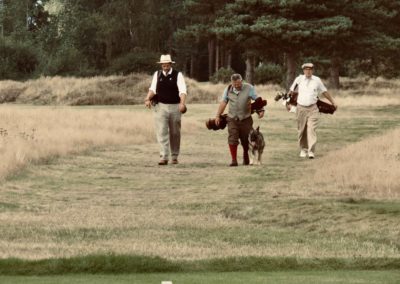 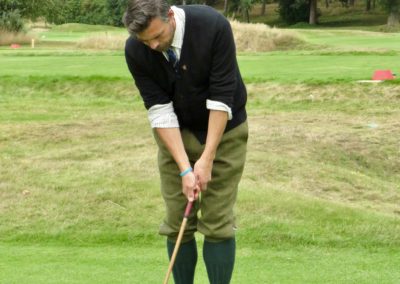 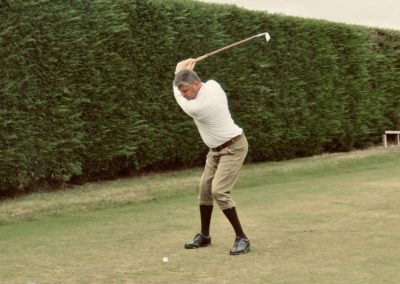 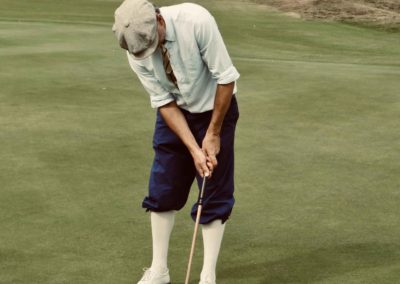 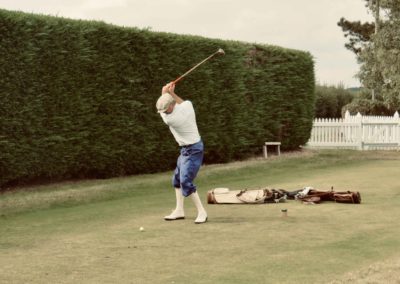 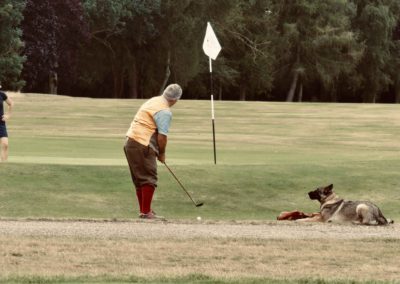 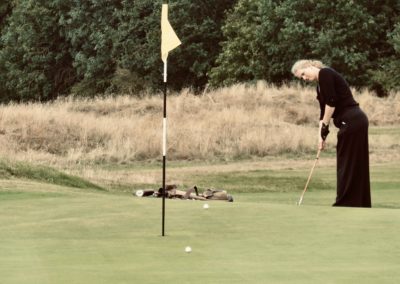 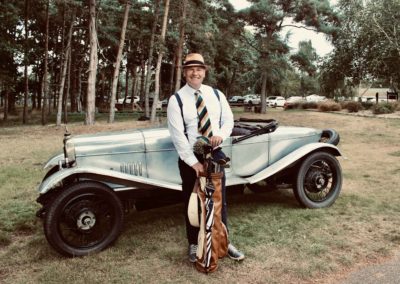 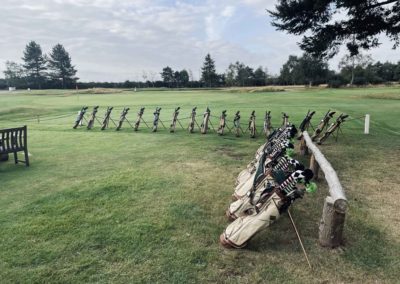 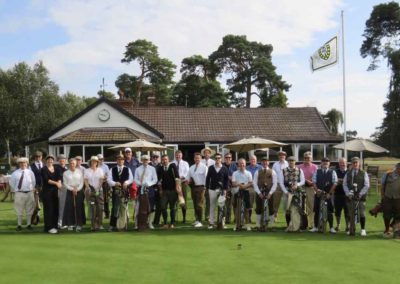 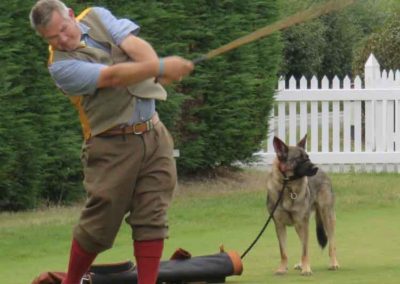