The Milestones of Flempton Golf Club

There have been many important milestones in the development of Flempton Golf Club and the layout of its nine holes.

One of the pivotal moments occurred in 1906 when John Henry Taylor was invited to Flempton by Sir John Wood, the club President, to redesign the layout of the course. 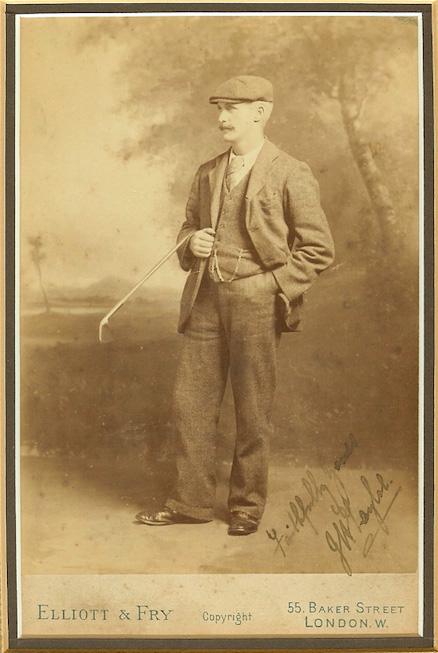 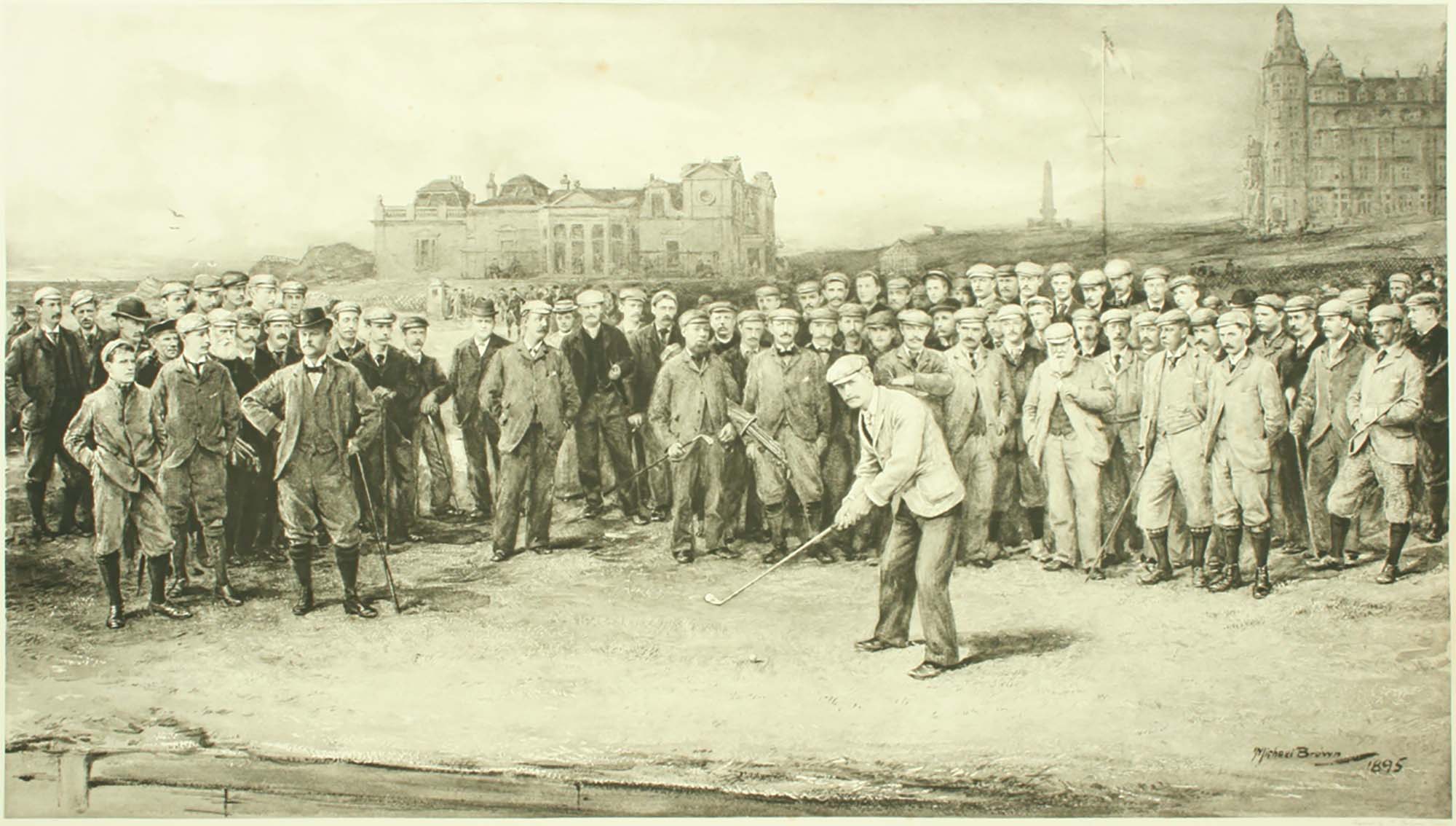 Taylor was prolific in the world of late Victorian and Edwardian golf course design and Flempton evidences the fruits of his design philosophy on every one of its nine holes. By the time Taylor visited Flempton he had won the Open three times and was known internationally as a true great of what was then early Professional Golf.

It is pleasing to think of Taylor walking the course with Frank Riley Smith, the Captain of the club at that time, and discussing its reconfiguration, including the introduction of three new holes which now occupy the 12 acres of land on the right side of the driveway as one approaches the clubhouse. The original 9 holes all lay on the left side of the road and this must have made for both a rather short and rather packed little course. Taylor’s re-configurations determined that six holes would lie on the original ground which had comprised Flempton & Bury St Edmunds Golf Links since 1895. Unfortunately the original routing of the original 9 holes has been lost to time.

Original Scorecard Dating Back To 1890’s

The J.H.Taylor 1906 layout, which includes the three new holes, is little changed to this day and the same must be said of the yardage which was 3059 yards once Taylor had made his alterations and stands at 3081 yards today.

It goes without saying that Flempton is very fortunate to boast such wonderful golf course heritage in the form of Taylor’s signature alterations but one might ask why was it that Taylor was invited to Flempton in 1906. The answer to this concerns the influence of a revolutionary piece of golfing technology that had become widely accepted by the British golfing public by 1906. Beginning around 1902, the new American, Coburn-Haskell rubber cored ball had made headway in amateur and professional golfing circles and the use of the ball in Britain had become largely accepted by 1904. 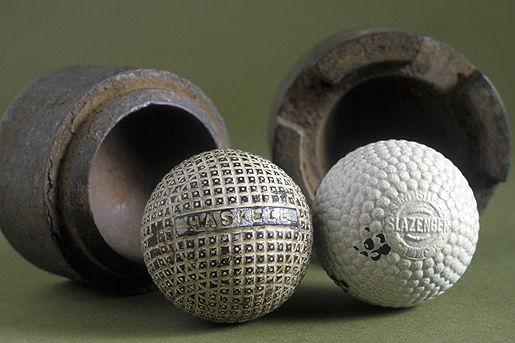 The differences between the older ‘guttie’ ball when compared with the new Haskell concerned, as always, length; the Haskell being quite superior to guttie in this regard. Rather quickly, many golf courses were being rendered less challenging by this new technology and legends such as Taylor and Willie Park Junior were being asked to visit established golf courses to offer potential revisions which might mitigate against the new threat. It is also noteworthy that by the time Taylor visited Flempton in 1906 his approach to golf course design had begun to mellow, albeit slightly. By this I mean that Taylor’s commitment to late Victorian (inland) golf course design had begun to temper somewhat. Nonetheless, evidence of what had become known as the ‘Procrustean axioms’ of late Victorian golf course architecture were still very much in vogue with Taylor and Flempton bears more than a few traces of these. The axioms, of which there were two, compelled the course architect of the early period to place and construct hazards in a certain way. With the commandment that ‘the ideal game consists in hitting a ball over a mark’ a premium had been placed on the construction of large cross bunkers, usually located not far from the tee on par four and five holes. Often, a second set of cross-bunkers stretching the full width of the fairway would be constructed to ensure that the first axiom – ‘a multiple of full shots’ – was accommodated. Whilst large cross-bunkers yawning across fairways is less common these days, their importance in the late Victorian period concerned the embarrassing occurrence of the ‘foozle’ or topped shot and the requirement that such an error be severely punished by such a hazard. Taking into consideration the guttie ball and the nature of the golf swing at the end of the nineteenth century, it is not surprising that topping was a common feature in the club amateur game. I include these digressions to make sense of some of the design features which are still very evident on Flempton golf course today, little has changed since 1906. One might observe the existence of cross-bunkering not far from the present third tee (now reduced from its former glory) and a second set of cross-bunkers a little further down the fairway. Likewise, one cannot fail to notice the cross-bunkers that are so vivid as one stares down the current seventh hole from its tee. Whilst these features have become more muted over time, they, along with an abundance of Taylor ‘mounding’ are reminders of the debt that Flempton owes to Taylor and a general golfing landscape that was undergoing many changes in the first ten years of the twentieth century. 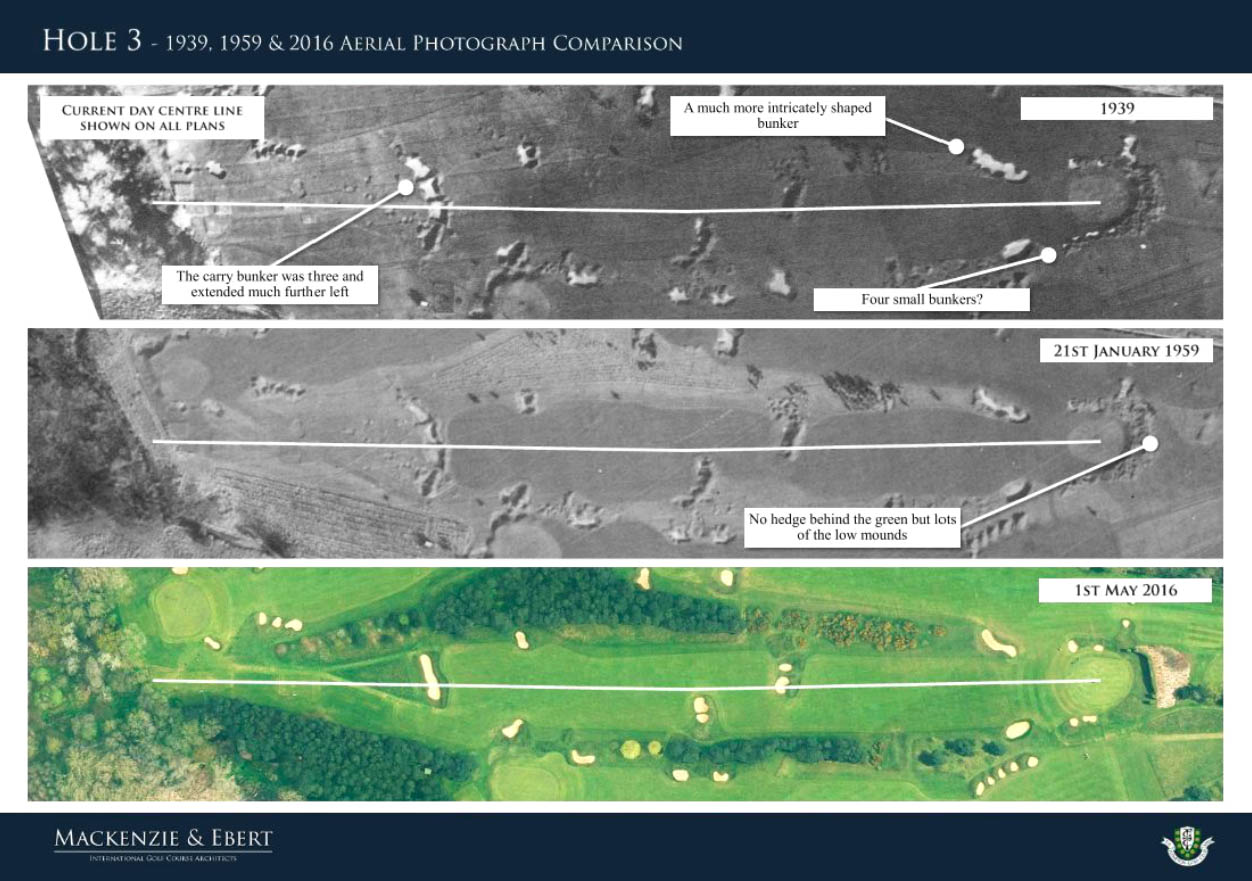 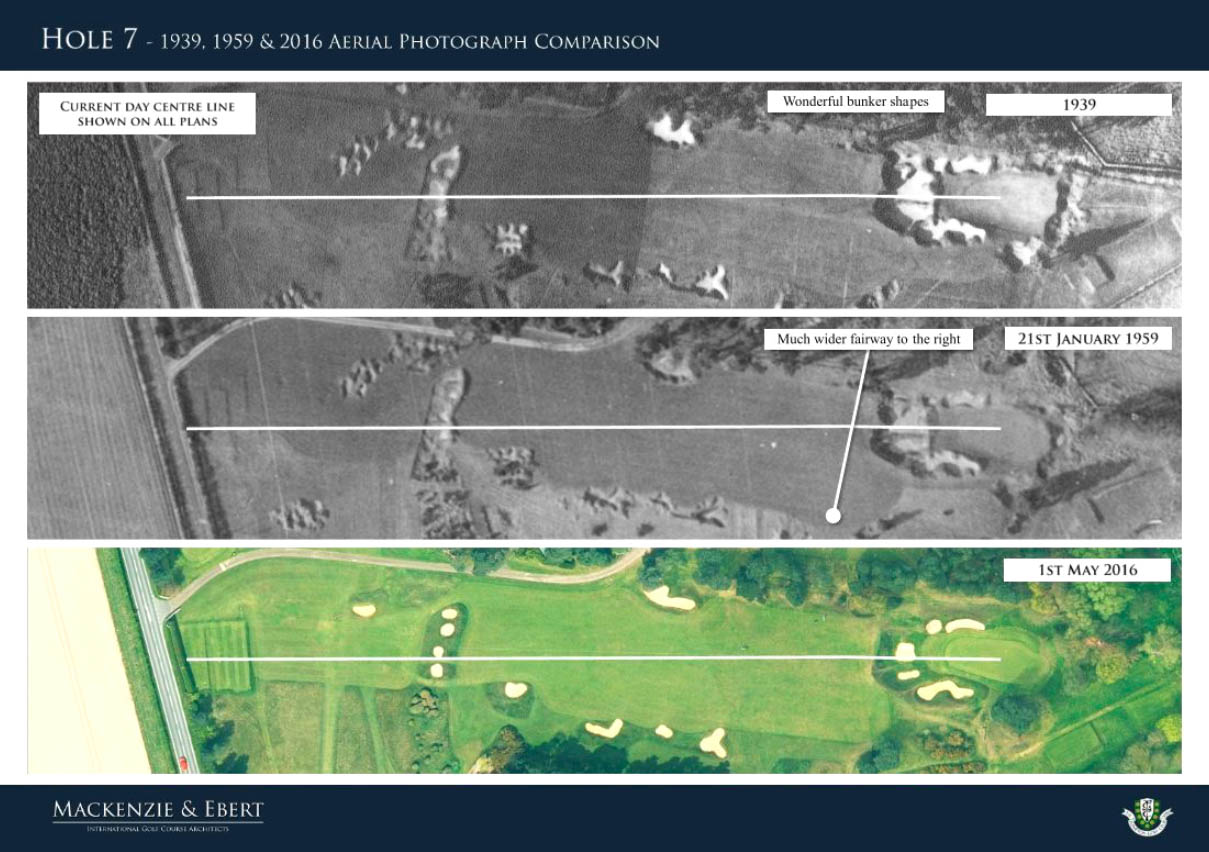 Map of Flempton Links Circa 1926

A course laid out over just 45 acres with a plethora of wonderful bunkers that as Martin Ebert has notably commented in his 2018 historical review of the course ‘grants the Flempton Links it’s soul’. 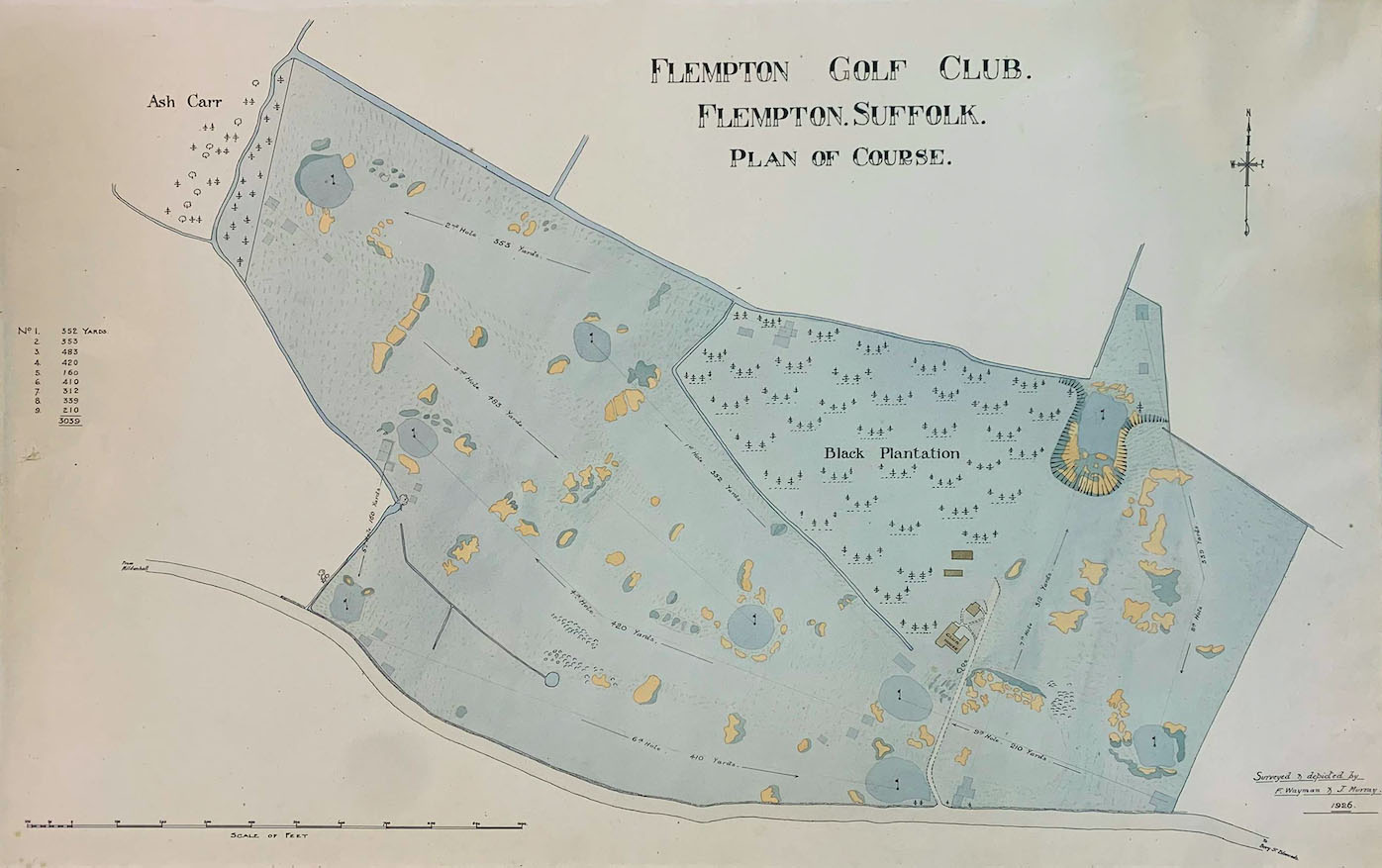 One notable change to the landscape of the J.H.Taylor 1906 course layout (illustrated above) was the planting of 5000 Scots Pines in November 1954. 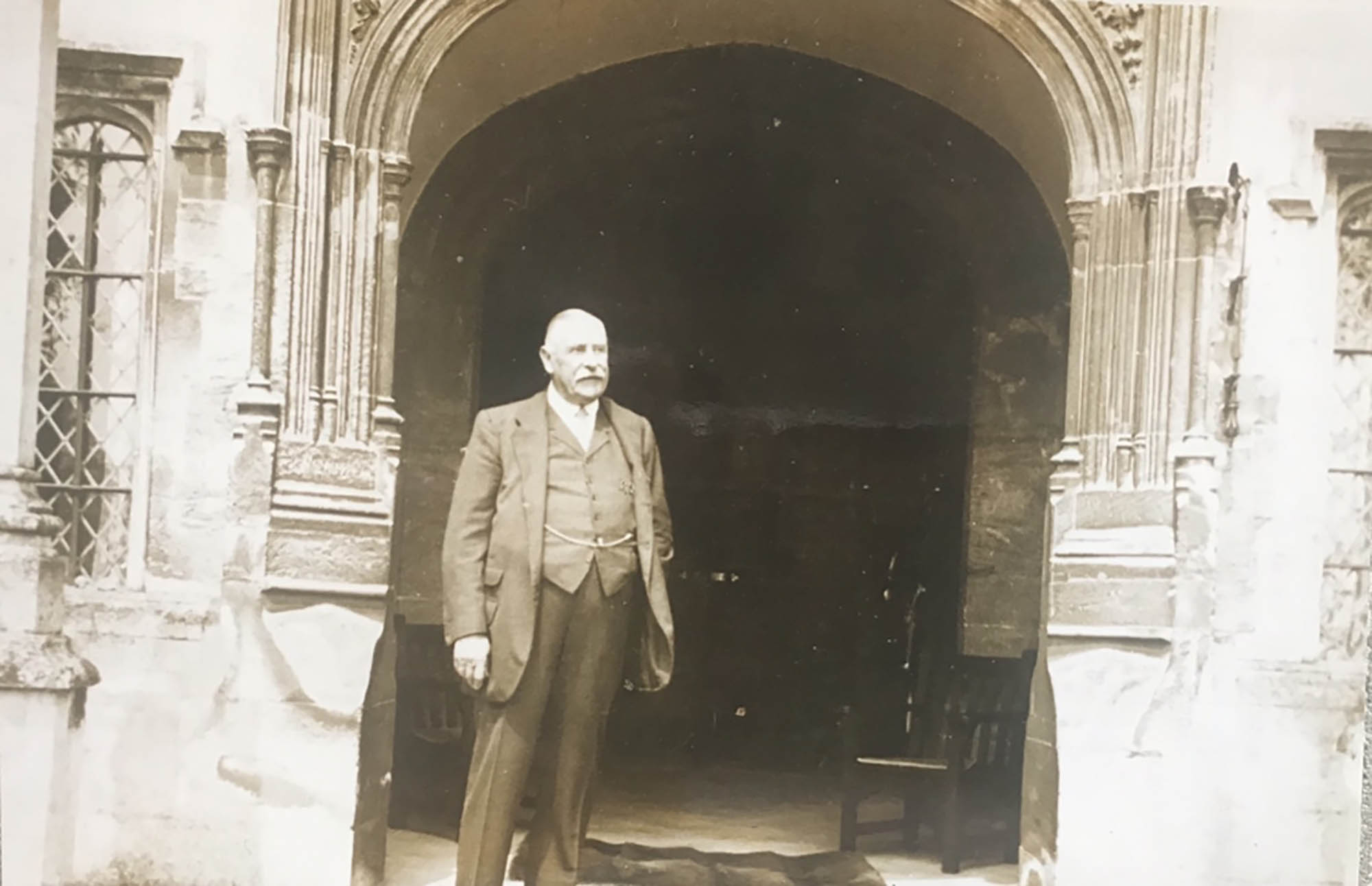 The Clubs President and Landlord Sir John Wood had died in 1951 and his estate was put up for sale. The membership were successful in buying the land in 1953. During the protracted negotiations the value of the trees within the Estate as a potential future income stream became apparent.

The clubs later motivation in planting the Scots Pines was somewhat mercenary as over time the trees would need to be thinned out and the felled trees could be sold for income. However this commercial venture was short lived, and the resulting long term legacy of the planting program led to the original nature and open landscape of the course being permanently changed. 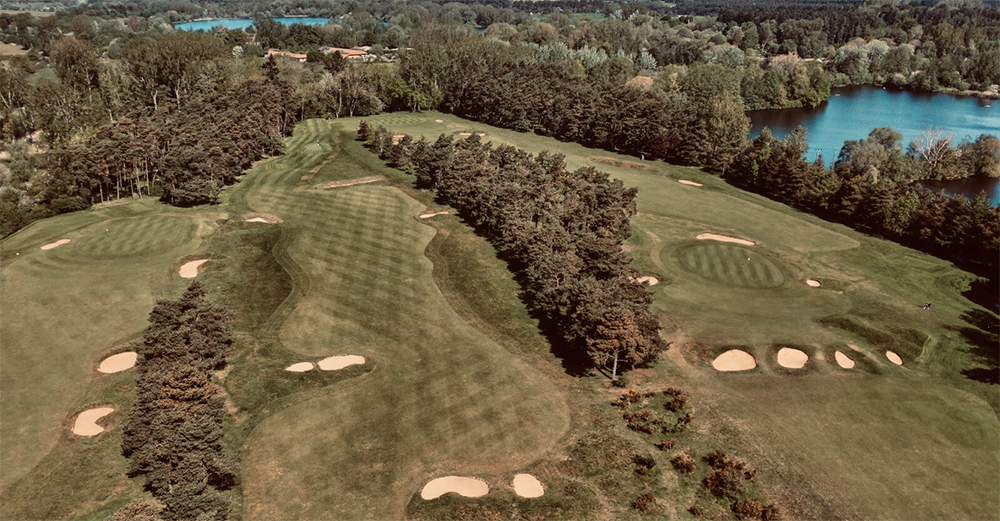 Martin Ebert was engaged by the club in 2018 to initially undertake a historical review of the course. This evolved into a Masterplan for course improvements that is based around the restoration of the original J.H.Taylor bunkering. This is now the cornerstone of the clubs long term Course Development Plan, thereby giving continuity of decision making and industry leading expertise through partnering with Mackenzie & Ebert to guide the future evolution of the course for the next generation of FGC members and their guests to enjoy.

A example of future works is the restoration of the bunkering around the 5th green. First image circa 1920’s and the second image the visualisation of its restoration as recommended by Martin Ebert of Mackenzie & Ebert Architects. 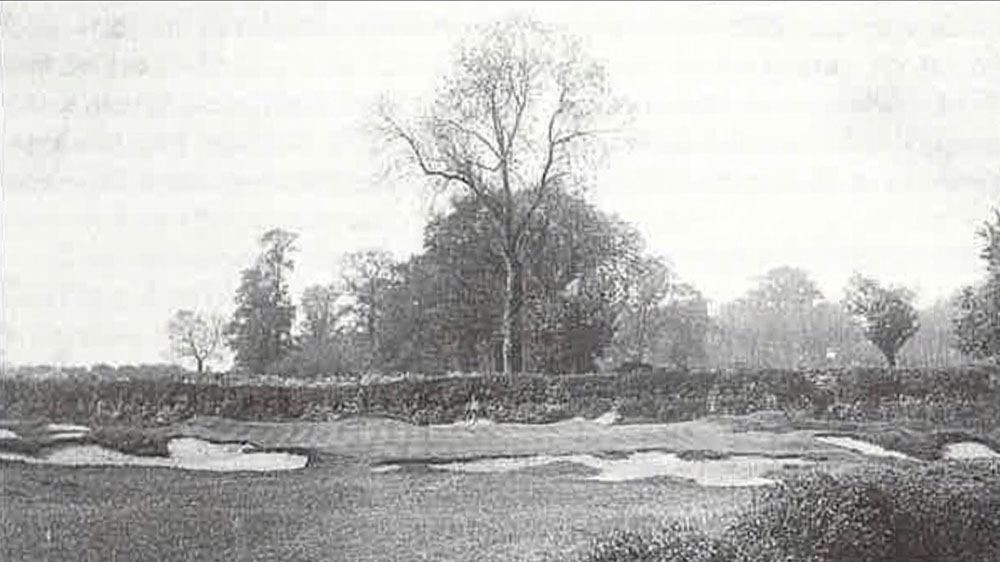 2/ Martin Ebert Visualisation Of The 5th Green With Restored Bunkering

M&E Masterplan
To understand more about J.H.Taylor the man and his significant contribution to the game of golf, a copy of ‘Golf My Life’s Work’ is available for Members to read in the Flempton Clubhouse by request. 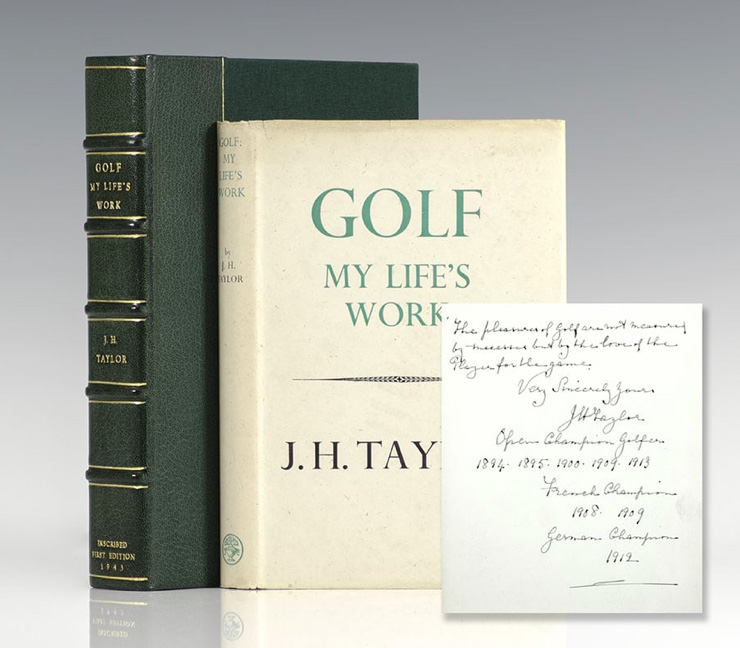 To understand more about J.H.Taylor the man and his significant contribution to the game of golf, a copy of ‘Golf My Life’s Work’ is available for Members to read in the Flempton Clubhouse by request.

In his introduction to this book Mr Bernard Darwin says:

‘My eyes have beheld the glory and I am really truly sorry for those who can only read about it.

‘It is something, and not a small thing. That they can read about it in J.H.’s very own words… There are two sentences in this book which I Love, because they come from the depths the writer’s soul. “Like”, he says, “to see a player settle down to his job with determination, and have little patience with those who enter upon it in the spirit of a picnic. To try to play golf really well is far from being a joked light-heartedness of endeavour is a sure sign of eventual failure.”

There stands the man revealed. J.H. never could or would take the game light-heartedly and never for a moment pretended that he did. He fought the enemy, he fought himself, he fought the very fates, and from this triple fray emerged triumphant.

‘Because J.H. was born near what he holds to be the best of all links – and I know better than to contradict him – he became a great golfer; but if he had never seen a golf club, he would have done some one thing much better than most other people. He was one of those bound to make their mark, and the mark he has made in golf is very far from being confined to his own achievements. When he was playing he could concentrate his attention on his task with unexampled ferocity, but he has never thought only of himself and his own game. He has been for years the leader of his profession and has led it to a position that would once have been unattainable. Others have helped the upward trend, but I take leave to say that the situation of the golf professional to-day as a much respected and self-respecting person is due, far more than to any other man, to John Henry Taylor’. 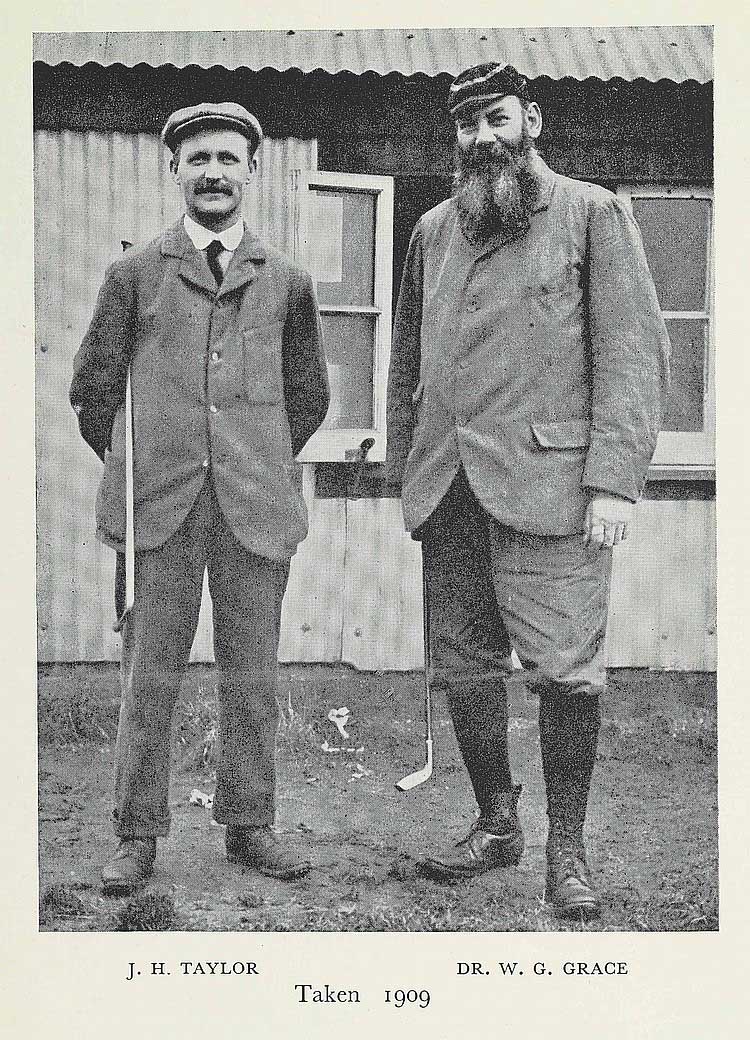 Harry Vardon and Ted Ray played an exhibition match at Flempton GC in May 1922. James Braid was rumoured to have had a hand in the original 1890’s layout of the course but it was J.H.Taylor on the right that laid out the course that is still played today. 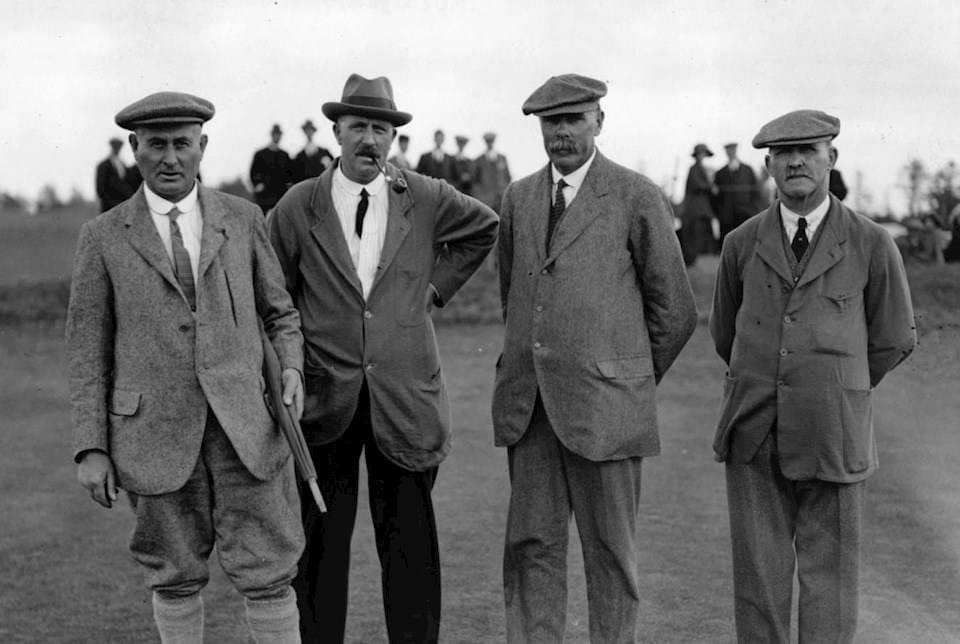